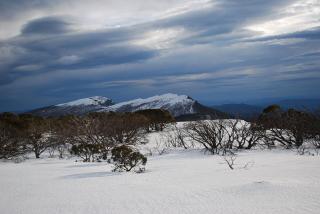 Some photos of hikes in the snow. For many years I resisted going hiking in the snow. The idea of walking in semi solid water did not appeal to me at all. I can still remember the very first time I saw snow on the ground and the first time I got snowed on. It was in Victoria on the Alpine Walking Track and I can still remember holding out my hand and thinking how bizarre this is. It wasn't at all as I had imagined. But over the years I've had to walk in snow. It can happen in any of the eastern states in highland areas at any time of the year.

I was once hiking in Victoria over the Christmas break and had hiked down from a range into an untracked river valley, intending to hike up the other side the next day. Because it was so pretty I decided to camp on an island in the middle of the river that was underneath an enormous log that spanned the river from bank to bank. Apart from being pretty, the other reason I camped there was that it was stinking hot and had been for days. The air was still but I hoped that what ever breeze there was would be a lot more refreshing if it was unimpeded by the thick forest on either bank.

I set up a tarp (I had not bothered to bring a tent). Which I always do not matter how blue and still the sky is - because of a lesson learnt a time when I didn't set up my tarp. It was hard to get to sleep because it was so still, hot and stifling. The temperature during the day must have been in the 30's and not much better in the evening. I had a small piece of Christmas cake for dinner - because it was Christmas day!

That night the weather turned. I woke up on Boxing Day, the day after Christmas to driving rain and freezing winds. One good thing about being under a tarp rather than a tent is that it is much easier packing up and the last thing you pack is the tarp that you can just strap to the pack. So the inside of your pack doesn't get wet. The log was too slippery to walk on to the far bank so I did the old "straddle with your legs and slide along on your hands and bum" to get across. Then I bush bashed up to the next ridge line which thankfully had a four wheel drive track along it's spine that took me up to the plateau and back to my car.

The higher I got, the wilder the weather got and rain started to be interspersed with hail, then sleet and by the time I got to the plateau - by snow. Hiking through scrub gets you the wettest it is possible to get. Every tiny leaf has half a teaspoon of water on it and your scrape past millions of leaves. So I was very, very wet and cold and miserable by the time I got to that four wheel drive track. By the time I finally reached the car....  Well you get the picture. What made it worse was that there was no way I was getting my two wheel drive car safely down to civilisation that day. Visibility was nil and the unsealed road was soaking wet and covered in snow. So I stuffed the pack in the car, stripped off and dived in and then rooted around the pack for some dry clothes, my sleeping bag and anything else that would get me warm. I also cheated and turned on the car and the heater for a while and slept in the car overnight.

The point of this story (apart from it being a lesson that you should always be prepared for the worst) is that stuff like that is not going to make you want to deliberately put yourself through that kind of crap. Plus I can't balance on things so I never got used to it via skiing or snowboarding. But even so, I gradually started to get into snow hiking and now I love it. Part of that is because it can be very challenging. Even easy hikes can become very hard, with difficult navigation where every single step is a gruelling effort. Part of the joy of hiking, for me anyway, is the physical challenge and the mental one.

I once hiked up to Mt Howitt from the Howqua River in the winter. Visibility was nil and the ground (especially on the spur under the summit) was under a metre or more of very recent, soft powder snow. I had to take three steps on the way up where normally one would do and it was hard to get my foot high enough to clear the snow and take the next steps. So high stepping the whole way (I know, I should have brought snow shoes!). But I still managed to find the trigonometry marker on the summit. I took my pack off to check the map (I was heading for Macalister Springs and Vallejo Gantner Hut and it would have to be by dead reckoning) but my wet hands were numb and the zipper had frozen over because while it was snowing on the summit - it was raining down in the valley and everything was icicles. I finally got the zipper open and with difficulty pulled out the map with my numb fingers. At which point the howling wind plucked the map straight out of the fingers I could no longer feel. It landed two metres away and I rugby tackled it and just, almost and nearly got my fingers on it - before the wind picked it up again and slid it four metres away.

The rest was like a comedy act. It was a laminated map so it was heavy enough that it didn't just take flight. I kept running and diving (and soft snow means you can do some heroic dives) but I was not able to quite get a hold of it. Finally, when I was very close to where the plateau ended and started to dive down to the valley below, I jumped on it with my whole body because my fingers just weren't up to it. With the map in raincoat pocket, I stood up and and looked around..... "where the fuck is my pack?". For just a moment my heart froze in my chest at the thought of no food, tent or sleeping bag. Then common sense (not my most dependable ally) reasserted itself and I turned around and (obviously) just followed my foot steps back to my pack.

I then crossed the Mt Howitt Plain to the ridge that connects Mt Howitt to the plateau where the hut is located. Dead reckoning all the way because there was no sign of the track or any markers and the cloud meant I couldn't see anything to give me my bearings. The trip to the hut was very hard because once I got off the wind swept plateau I found that the route under the leeward side of the connecting ridge was piled high with soft snow. It might not have been the Himalayas but it was still bloody hard work.

But what a great story! A fantastic adventure and made on a short walk I have done a hundred times before. But made much more challenging and memorable by a little bit of snow.