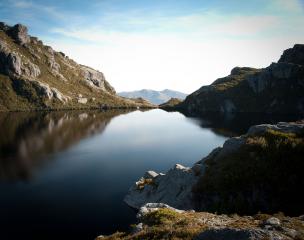 The photos you see here are from a number of different expeditions I have done to the Arthurs. I say “the Arthurs” because I almost always do the Western and Eastern Arthurs in the one trek. It usually takes me between thirteen and fifteen days to do the full traverse. Of that, the return back via the wet and muddy button grass plains south of the range, along McKays Track, only ever takes two days. So that should give you an idea of what traversing the very rugged range is like. At one time I would have regarded this as one ludicrously tough hike. Nowadays though, I would only rate it as very hard when the weather turns to shit. But being South West Tasmania it does that an awful lot – which is good because I love a challenge.

You will get the wrong impression from these lovely photos of blue skies and a temperate sun. Even the photos taken in drizzle do not really do the weather justice. "Real" weather means I can not take my camera out. I have celebrated two white Christmases in the Arthurs and of the six or seven times I have been to Federation Peak (the culmination of the hike that makes all the hardship worthwhile), I have only been able to climb it twice. All the other times the weather just made it too dangerous. In a way, this is a good thing. Every time I do this hike I get to do a side trip or see something I never saw before because the weather was too bad all the previous times I was at that particular place. You hear stories of people saying “didn't rain, not once!” and marching back to the camping stores demanding money back for rain gear they never used. I have had one full traverse of both Arthurs where it was beautiful weather the whole way (so long as you don't count the three days of bucketing rain in the middle..... Oh! and the last night beside Seven Mile Creek when the creek burst its banks and flooded out my tent). But I had one trip where it rained every single day for the eight days of the trip (one of the few trips where I only did the Eastern Arthurs).

Always allow for extra days and carry more food and fuel than you think you need (and a book) because there will be days when it is just too dangerous to do anything other than spend the day – or days, in your tent. If you ever do this hike I would strongly recommend that you purchase John Chapman's book “South West Tasmania”. It has extensive track notes and detailed descriptions of the route and side trips. The Arthurs are a maze that has been sharpened by glaciers and a compass and maps or a GPS by themselves are not that great an aid to navigation. Especially in bad weather. You should also be prepared and equipped for appalling weather conditions and carry a Personal Locator Beacon.

Having said that, I must say that it has improved a lot since the first time I did it. There is timber decking to pitch your tent on at all of the major camp sites along the range and toilets (sort of – I've included a photo of what the toilets consist of. Let's just say that having a poo is part of the adventure). I can still remember what it was like trying to pitch a tent on a rocky hump smaller than my tent or on a slope – or on a bog in the howling sleet filled wind, in the days before these platforms were built. This is a huge improvement not only in comfort but the old camp sites were very ugly and degraded. But I should mention that the camp sites after K Moraine (which is where most people get off the range and head home along the plain) have not been improved. Nor has the track itself which can be quite faint and hard to follow in bad weather. But don't let that put you off. The character of the range changes after K Moraine. There is much less precipitous upping and downing (but a lot more bush bashing) but it is very lovely and it always surprises me that more people don't do the Western Arthurs in it's entirety.