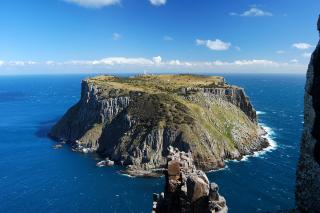 Photos of the rest of Tasmania. I say "the rest" because some of these photos come from day trips or minor variations of hikes already described. There is a lot to see and as many times as I have been there I have still only seen a small part of what Tasmania has to offer.

There are some photos of Cape Pillar which I would have never visited except for a chance conversation with another hiker on the South Coast Track who reckoned it was one of the most spectacular views in Tasmania. I'm very glad I did. The only other people I met on that overnight hike (but I could have easily done it in a day) were two German guys on a trip to Tassie. Tasmania must have an amazing reputation in Europe because you will constantly bump into northern Europeans. People from other nations too but a lot of Germans and Scandinavians. Often in very challenging areas and my hat goes off to them. I would be hesitant about going to another continent and ecology totally alien to what I am used to. I wouldn't be familiar with what is dangerous, what is safe or even what is worthwhile and what is not.

Even in Australia, walking in Tasmania is totally different to walking in the deserts of South Australia. So a different country with tigers, bears and unicorns would just scare me.  So good luck to them!

Although I do have to say that those particular German guys had the whole of Cape Pillar to camp in but pitched their tent only two metres from mine. Maybe they had heard about drop bears?

Some of the other photos in this gallery show a beautiful hike I had never heard about before and found out about purely by chance. I will definitely do it again. I will also have to write a track guide about it as it isn't that well known. It is a hike that starts from the car park at The Walls of Jerusalem National Park and takes you though to New Pelion Hut on The Overland Track via Lees Paddocks Track. Incredibly, Lees Paddock is a stunningly beautiful valley that is inside Cradle Mountain Lake St Clair National Park but is privately owned. If I ever hear that it is for sale I will rob a bank and buy it. From there you walk down The Overland Track and then turn off at The Mersey River and walk along it's south bank through Never Never back into The Walls of Jerusalem.