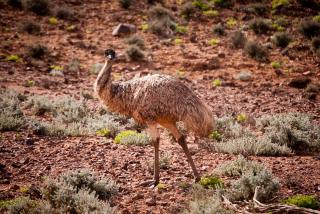 I haven't taken as many photos of animals as I could have. By the time I get my pack off and dig out my camera they are usually long gone. But, over the years, I have occasionally been lucky enough to get a decent snap of something interesting. I just wish I had been a bit quicker when that thylacine came up to my tent that morning (nah.... just kidding!).

But there have been many rare sights that I never managed to record for posterity. But what is very sad is that those rare sights seem to get scarcer every year. There are hikes now where I see ferals far more often than natives. Deer, foxes, dogs, cats, goats, horses – the list is endless. I can still remember the very first time I saw a deer in the wild. It was on Wellington Plateau in Victoria's Alpine National Park (just above Lake Tali Karng). It gave that deep cough they give out when startled (and scared the absolute crap out of me) and bounded away. It is a strong memory because I had been hiking in the area for years without ever seeing one. Nowadays the deer absolutely infest the park and I almost never fail to see some when I go for a hike in the area. With some effort ferals can be, if not eradicated, then at least controlled. The first time I went hiking Vulkathunha-Gammon Ranges National Park there were goats everywhere. At night you could hear bands of goats bleating at each other constantly and I would stumble on them all the time during the day. In fact I collected half a dozen goat skulls to give to friends on that trip (handy if you ever want to conduct a black mass!). But mass cullings by the rangers helped out by volunteer local shooters have made a real dent in their numbers.

One step that would make a real difference (but will never happen) is the compulsory sterilisation of all domestic cats and dogs. Breeders would need a special licence to breed domestic pets. If pet owners could see what packs of wild dogs do to natives species they might not be so protective of their little darlings. Cats are even worse. Dogs kill for food. Cats kill for fun. Another thing that would be good is a pet tax to defray the huge costs of dealing with pets gone wild.