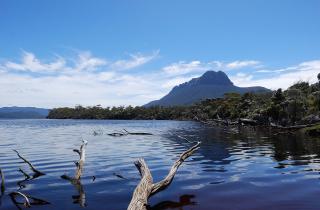 Most of the times I have done Tasmania's South Coast Track I have done it via the Southern Ranges. That means taking the inland track along the range that parallels the South Coast Track. The Southern Ranges Track goes over Mt La Perouse, Pindars Peak and eventually leads to the beautiful and distinctive Precipitous Bluff. You then go over that and down the other side to New River Lagoon and then slosh through the lagoon for some hours (there is no track and the scrub along the shore is impenetrable) until you eventually get to Prion Beach and join the South West Coast Track proper. From there I keep going to Melaleuca and sometimes on to South West Cape - the most southerly point of the Tasmanian mainland. A lot of people fly into Melaleuca and then walk out to the ranger station/road head/bus stop/ at Cockle Creek at the eastern end of the track. I actually like going over some of the same real estate twice but in different directions. You see things you didn't see coming the other way. Melaleuca is not civilisation - just a disused tin mine with an airfield, a hut and a few other bits and pieces. It's handy for a resup though. The air charter services will bring in a box of food for a surprisingly small amount of money. The longest single hike I've ever done was this one. Eighteen days worth (I wore the same clothes every single day and night!) although I have done it in less.

Doing it this way is a fantastic hike but pretty rugged in places. I usually leave the car at Cockle Creek and take the bus to where the Southern Ranges Track starts (you have to make special arrangements for that). The beginning of the track is well made, signposted and pretty easy. After Mt La Perouse it gradually gets worse and after Pindars Peak is little more than some rough pads. There is nothing between Antarctica and the range but the roughest, wildest weather the Southern Ocean has to offer. So be prepared for the worst Tasmania can deliver if you don't get lucky.

Speaking of which, let me tell you a true story of how luck and carelessness can turn a hike into.... an adventure. The second time I did this hike I started off in beautiful, calm and sunny weather. The next day was the same and I crossed over Pindars Peak and down the other side without a problem. Took off my pack and took a couple of photos and then realised that my sleeping mat, which was wrapped in a tarp and strapped to my pack, was gone. Much more importantly, my goretex rain coat was wrapped up in that tarp too. I normally never carry anything outside my pack but fitting in two weeks worth of supplies hadn't left me with much choice. I dumped the pack and walked back. And walked back. And then walked back some more to the connecting ridge on the other side of Pindars Peak before I found the bloody thing. By the time I got back to my pack I had only three quarters of an hour left of daylight. The "track" was only notional, the wind had picked up, the weather was obviously about to turn and the next camp site was a couple of hours away. Needless to say I lost the "track" in the twilight. The scrub was incredibly thick and tough (it has to be to survive the weather) and mixed in with that strange tree I have only seen in Tasmania. Its trunk grows horizontally at about waist height or higher in interwoven thickets and is impossible to get through - especially with a pack on your back. I ended up in a little tiny gully with thick Scoparia and Pandani inside and around it and perched just above the edge of the plateau. Which at least gave some shelter against the now howling, gusty wind and drizzle. But there was no room to set up a tent or even rig a tarp. So I crawled into my sleeping bag, wrapped my tarp around me and slept with my knees curled around a Pandani trunk and my belly wrapped around a second one in an uncomfortable "S" shape. And should I also mention that it started raining heavily? I woke up with wet patches where the rain had crept into the tarp and then spent over an hour refinding the "track" which was no more than one hundred metres away - I had to keep back tracking and detouring around impassable scrub before I could reacquire the track.

The moral of this story is that if I had been lucky and this had all happened the day before - it would have been a calm, warm, golden day and night. I would still have been uncomfortable but the view from the top of that little gully was magnificent. Which would have made up for that. The other point is that it would have never happened at all if I had been careful. A dollars worth of stretchy shock cord wrapped around the straps and I would never have lost the bloody sleeping mat in the first place. A little foresight goes a long way. Have a Personal Locater Beacon but help won't be quick - so be careful and never need help!

Once you reach the South Coast Track itself it is pretty safe and the track is obvious but of course, very remote and the weather can make things very, very hard. I once crossed the very flooded Louisa River stark naked (although my clothes were soaked from belly button deep creek crossings the day before - so I can't think why I bothered) and half an hour later, while crossing over the Ironbound Range to Deadmans Bay on the other side, it started snowing with wind gusts hard enough to push me off the track. But then, just as I got to the other side of the range, the afternoon turned into a calm, golden, blue sky day. Tasmania – you have to love it!

There are some interesting detours off the track if you have the time - such as Louisa Bay where there are huge aboriginal middens and archaeological excavations in the caves beside the nearby lagoon. The local tribe lived there seasonally and would take frail bark rafts out to the islands off the coast to hunt seals and mutton birds.

There is also Precipitous Bluff which can be done as a side trip from the South West Coast Track. As mentioned, you have to walk through the waters of New River Lagoon for some hours to get to it but the track to the top is well made and easy to make out. There are good camp sites on both sides of the bluff and one or two rough camp sites on the top. Precipitous Bluff itself is magnificent and also features huge sink holes and caverns. The flora on the western side is unique and very reminiscent of rain jungle. Well worth the effort.